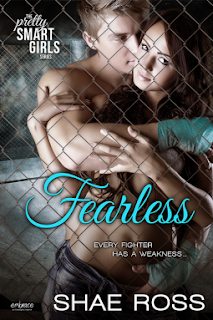 
Every fighter has a weakness...
Devi Dalton won't let anyone hold her back. With the help of her friends, she's taken control of her future and traded her messed-up family life for a new job in Manhattan. Her only obstacle? Ben Winslow, the sexy friend she's desperately trying to resist. If she's going to succeed, she can't afford to be distracted, no matter how hot the chemistry burns between them.
Cage fighter Ben spent six months trying to convince Devi to take a chance on a relationship. Now that they've reunited in New York, he's not letting her push him away again. They're more than friends-always have been-and he'll do whatever it takes to prove it to her. First, he has a few demons of his own to slay...one of which could ruin his chances with her for forever.
But every fighter has a weakness. Ben's is Devi. And this time, she'll need more than just her favorite "Fearless Red" lipstick to protect her heart if she lets him in...
LOVE The cover so much,anyway thank you thank you to Entangled Publishing for my copy. They are my favorite <3 And now for my thoughts

ASDJKFGFKJGKJGKGFKFGKGHKJHKJHGKJKGKGGFJ , i enjoyed this book a lot and at the same time i wanted to flounce. But i read through and skimmed (because of a plot point i just knew would happen).
Devi is awesome and i love her attitude, it's refreshing to see female characters like this instead of the same redundant ones. Devi and Ryan's (Her BFF And Teammate) Friendship is Goals.
Now let me tell you i thought this would be another " they are perfect for each other but lets just stay friends and put unnecessary conflict just because) story and it was but it wasn't, yeah after 6 months they took that big step and stop lying to their selves (mainly devi) and said we want each other and there is nothing stopping us.

The chemistry was hot and swoon worthy and Ben is just SWOOOOON, i mean cage fighters are very (askjdsdfkfhkjgg) just makes his appeal even more sexy. Ben really cares for Devi and he has a no nonsense attitude that is good for her,he is upfront about things ( except for that time, we'll get back to this) and he loves taking care of her.

As i was reading i was thinking finally something i can enjoy and everything was going well until in a stupid move, Ben didn't tell devi about a one night stand with someone most of their friends knew and Devi knew as well and that was when i became angry and in my head i said " Oh this better not turn out to come back and mess up their relationship, come on Ben just tell her) and he didn't and i just knew that somehow it would lead somewhere and lo and behold it did, i didn't want useless drama and i know conflict drives the story but it wasn't needed here.

So yes i skimmed some but all in all i really enjoyed this book and the ending was just right for their story.