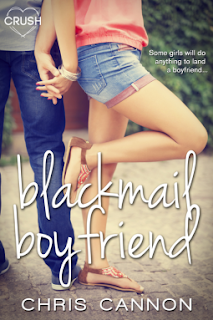 sometimes, blackmail is the only weapon a girl has…
Haley Patterson has had a crush on golden boy Bryce Colton for ages. But when she hears a rumor that he hooked up with her she gives him a choice: be her boyfriend for a month to show other guys that she’s dateable—despite her overprotective and very intimidating brothers—or deal with the angry, cage-fighting boyfriend of the girl he actually did hook up with.
Bryce didn’t know the other Haley even had a boyfriend. He was just trying to get his ex off his back. And now, not only is he being blackmailed, he's being blackmailed by an honor student. His new “girlfriend” has two three-legged dogs, her father mows grass at the country club, and she's…well, difficult. And different.
Can something so fake turn into something real?
Special Thanks to Entangled Publishing and Ellie Mcmahon for this free copy, i love them.

Now as you should know by now i love YA and i love books like this, the plot was simple and somewhat done before but i enjoy these plots so i was happy to read.

I was very disappointed when i finally read, i was into it from the beginning but i wasn't feeling it as the story progressed. i didn't bond with any character and the chemistry was lack luster. To be honest the plot was the main issue( i know i know, i love them) but after reading so many it just fell flat. Like every love and hate story it has to be unique and it just wasn't.

Bryce ( i always have loved that name) was so underwhelming to me, there was no swoon or butterflies, i was more interested in his friend who was in the same boat as him but he grew on me.

I Did love the sibling relationship and how protective Haley's brother's were, other than that i was going through the motions reading this book and i usually like Dual Point of Views but for this story i didn't.

Would i read again? No but i would recommend to everyone else.