Hey!, Today i'm doing my first blog tour and i want to thank Tara Sonin at Paperlanternlit for everything. This is the last stop on the tour
Today's Blog Tour is for "Rules of Seduction" By Jenna Mullins. It's her Debut Book and i think she came out the park swinging with this one, it includes a review, interview and a giveaway! 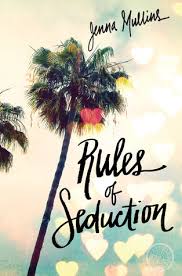 I received a copy in exchange for an honest review, I was so excited for my first blog tour and to read this book. The cover is so pretty and I love stories that go into the true background reality of Hollywood and pull back the curtain. It was very funny and I loved Dani and her roommate who was quirky and different. Tate was hot but he didn’t make me feel anything and the chemistry just wasn’t there for me, I’m going back to give it a second chance, I was reading and loving it until mid-point when it became a drag and I didn’t want to finish it but I can find myself needing to find out the ending. I Liked that they both had a sense of humor and her roommate could be my bff, still this didn't meet expectations.  I Would have liked Tate but i felt that his character was forced um as a book boyfriend to be sexy etc, i don't know but i do know This will be one of my second chance series.

In fourth grade, Jenna put her classmates into a story about fire safety, and they laughed the entire time she read it aloud. Since then, she's been writing with the sole purpose to entertain other people. Fire safety, however, fell to the wayside when she accidentally set her grandmother's bathroom on fire when she was 12.

In 2010, she moved from Indiana to Los Angeles to intern at E!, and she is now a writer/editor/pop culture gatekeeper at E! Online. A Midwest girl who prefers Southern California weather, Jenna loves the Indianapolis Colts, saving Hyrule and training for her backup dream career: deciding what goes into the baskets on Food Network's Chopped. She currently resides in LA with her nerdy, handsome boyfriend Kyle and their two fluffier-than-normal cats, Glenn and Zelda.

Get to know her even more!, i had the opportunity to ask her a few questions:

Is there any difference from being an editor to actually writing your own book?
The biggest difference was the best. I knew I had a safety net to catch my spelling and grammar errors when I was writing my own book, when at work it's up to me to make sure my copy is perfect. When I was writing Rules, I could write utter nonsense and misspell every word and someone would clean up after me. Of course, I would never torture an editor like that but it was nice to know I could be ridiculously sloppy if I felt the need.
What was your favorite scene to write?
Probably the scene where Tate and Dani are outside of Plum, when Tate grabs her wrist and inspects her tattoo. It's such a simple action, but to me it spoke volumes about the chemistry between them. Sometimes the simplest things are the sexiest. It was kind of turning point for Dani.
Who is your favorite character?
Dani. I love writing vulnerable, sarcastic characters that are thrown into a brand new world.  And it was kind of fun to write Camden, because I know someone guys like him in the industry.
Out of all the books you've read, are there any boys you would want Tate to meet?
Peeta from The Hunger Games kind of looks like Tate so let's get them together and have a hot, blonde-haired man candy party. Gale can come, too.
What was your inspiration for writing this novel?
I wanted to pull back the curtain on working in the TV industry. I just barely scratched the surface with this book so I can't wait to show more of what really goes on in Hollywood. Also, I love to investigate how people deal with trust issues. Basically I wanted to pick apart this quote, which is AIM profile circa 2003 level cheesy, but it's accurate: "Trust is like a piece of paper. Once you crumple it, it can never go back to the way it was. No matter how much you try and smooth it out."
Favorite Harry Potter House?
RAVENCLAW FOR LIFE! My boyfriend is in Gryffindor. It keeps things interesting.
Is there any chance you might write a YA Dystopian Novel?
I actually have an idea for a dystopian YA novel. I don't really want to reveal too much about it in case I do get a chance to write it. It's a plot bunny currently burrowing in my head; we'll see where it goes when I have time to work on it.
Your favorite book boyfriend?
Wes from Sarah Dessen's The Truth About Forever. A smart, mysterious artist with a great sense of humor? C'mon. Jackpot. Plus, in my head he kind of looked like Joe Jonas circa 2008 so my weird crush on the Jonas Brothers can live on, even if the band no longer exists. I'm still not ready to talk about those boys breaking up. When I get over NSYNC's end, maybe I'll be able to talk about the Jonas Brothers.
The Last Book you've read?
Dark Places by Gillian Flynn. I usually rely on my good friend Tierney (who I wrote in as Tate's sister) to tell me what to read. I loved the true crime aspect of it. I'm also in the middle of re-reading the Harry Potter series.


Your Favorite Classic Book?
Gone With the Wind. It was my mom's favorite book when she was growing up. I have the copy she used to read as a kid. It's one of my most treasured possessions. After my cats.

I So want to meet her, she sounds so cool and awesome and i can't wait to read her Dystopian Novel


Enter The Giveaway To Win A Copy of The Book