*SQUEALS* So excited about this post today and i'm just beaming as i type this out. If you remember i participated in the Fire Falling Release Tour ( That ending Though) and now i am revealing the cover for the third book in the series earths end (which is AMAZING) 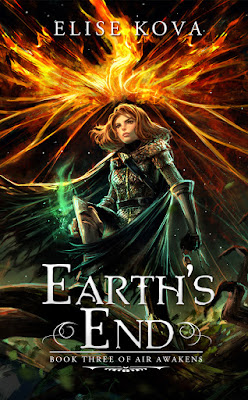 SQUEALSS OH MY GOD LOOK AT THAT BEAUTY. IT'S SO BRIGHT AND PRETTY AND VHALLA LOOKS AWESOME. LOOK AT THE IMAGERY

A woman awoken in air, a soldier forged by fire, a weapon risen from blood.
Vhalla Yarl has made it to the warfront in the North. Forged by blood and fire, she has steeled her heart for the final battle of the Solaris Empire’s conquest. The choices before Vhalla are no longer servitude or freedom, they are servitude or death. The stakes have never been higher as the Emperor maintains his iron grip on her fate, holding everything Vhalla still has left to lose in the balance. Elise Kova has always had a passion for storytelling. She wrote her first novella, a high-fantasy, in sixth grade. Over the years she’s honed her love of literature with everything from fantasy to romance, science fiction to mystery, and whatever else catches her eye.
Elise lives in Saint Petersburg, Florida, where she’s currently working on the next installment in her debut YA fantasy series: Air Awakens. She enjoys video games, anime, table-top role playing games, and many other forms of “geekdom.” She loves talking with fans on Twitter (@EliseKova) and Facebook. Visit her website, EliseKova.com, for news and extras about her books!


And last but not least i have a giveaway and exclusive interview from the cover artist Merilliza Chan, and she  lets us in on the process of making the cover's for this series.

Okay, everyone, a HUGE thank you to Merilliza Chan (Meril), my cover artist, for being so awesome and helping me put together this super cool exclusive for you all.
At the top here is a short “interview” with Meril and myself to give you an idea on how we go about making the covers and our perspectives on the process. You can use any or all of this interview.
But, then, Meril authored a whole blog post on the process with pictures. She asked that that only half of the post was used and then linked back to her site.

What program do you use to create your artwork?
I use various tools to create artwork. When starting out with ideas I prefer making them on my sketchbook first, not minding specific details and just having fun with idea generation and doodling. This is the stage we call ‘thumbnails’. The next step I usually use the digital media to finalize the thumbnails, but sometimes I go straight out and sketch my favorite thumbnail to turn into a finished linesketch. As such, all my finished artworks are painted and done in Adobe Photoshop (CC 2014, currently), along with my old and trusted Wacom Intuos 4.
What’s your background? Did you study art in school?
I finished university in 2014 with a degree of Bachelor of Finearts, Major in Advertising Arts. My Alma Mater is the University of Santo Tomas here in Manila, Philippines. The course I took focused on graphic design, branding and marketing for agencies, which is a very good background to have in any art industry. During our 3rd year to 4th year we had special classes we called ‘Electives’, which are basically specialized classes, this was the time I decided on focusing more on digital painting and illustration, rather than going into graphic designing, so I took electives related to my chosen field. By the time I got to the thesis phase, which is the final requirement before finishing the course, I decided to take on Book Illustration. I’ve learnt many things from my background that if it weren’t for it I’m not sure if I’ll be able to do the same things I’m doing right now.
What attracted you to doing the covers for the AIR AWAKENS series?
The AIR AWAKENS series was my very first book cover series. I’m not going to lie that I first took interest on the project because it was an opportunity for me to finally work on the book industry. Any artist starting out would be uncontrollably excited when offered a project as such. And THEN I read the story, read about the characters, got to know an amazing client and author, a friend, and so there lies my true answer. It was the perfect project for me, I loved the world, I loved the characters and I loved the idea behind it all. And so I wanted to make sure that I make it very special.
What is your favorite cover so far?
That’s hard to say. I loved all of it so far! (Or I’m being extremely biased, because well, I worked hard on all of them! haha) But if I’m being asked as an artist I would probably say the first cover. It was simple, straight to the point, saying, ‘Hey, this is Vhalla, the Heroine for this amazing world/story’. I like covers that has that iconic, unique feeling to it and so I would say that the first cover definitely did it for this series.
(Without any spoilers) What did you like about the third book in the AIR AWAKENS series: Earth’s End?
Earth’s End is my favorite of the 3 books so far and my main reason is that it felt like everything was coming down together, finally! Especially for Vhalla. I loved the Vhalla in this book. The character has developed into something much more and although she’s still probably transitioning, she’s finally getting there. In general what I liked about Earth’s End is that there’s more action, more storyline focused on Vhalla and her world, there were more things learned about the other characters too such as Baldair, among many others. Elise has outdone herself with this one.
What’s one thing that you think would surprise people about the process of creating the AIR AWAKENS covers? Or, one thing people may not know?
Elise has always told me that she and her author friends never expect their artist to read the whole manuscript. And I read the whole thing because well, I just couldn’t help it. I have become very attached! She says I make the most ‘official-est’ fanart ever and I agree.

How did you come to work with zwxArt (Meril Chan)?
Well, when I decided to self-publish I knew the cover art would be one of the most important things about my book, and I also knew I wanted drawn artwork over photography. I, personally, feel like it’s “iconic high-fantasy” to have a painted cover and so that’s what I began searching for. Also, as an indie author, I wanted to work with someone else who wasn’t a big cover art company and perhaps was just getting their start also. So I was thumbing through DeviantArt for illustrators I liked and I found Meril.
It was the image below that made me know I needed to work with her. It was like she’d already created something that I thought captured the essence of Air Awakens, even if the visuals I wanted were completely different. Can you explain the process from the author’s perspective? How are covers made?
Well, I can only explain in my limited experience. It’s my understanding that traditional authors get little to no control over what their covers look like. For me, I started by sending Meril what had been my query letter and a handful of scenes I pulled out from the story. I also sent her the draft manuscript in case she wanted to find how a particular scene I’d chosen to pull out fit in. I’d been told that cover artists are too busy to read their client’s work in its entirety, so I wasn’t offended by the notion of just handing her some scenes.
To my surprise, Meril read it all. Talk about knowing you made the right choice as an author! I seriously count my blessings every day for this.
So, Meril reads my draft manuscripts (she’s usually among the very first to read them before my editor) and then she begins drafting thumbnails. These are very rough, quick sketches to give me an idea of the layout. She explains a bit of each, what she sees as the inspiration and story for each cover. From there we tweak them.
Tweaking can be everything from, “What if she’s holding…” to “I like the third and fifth sketch, can you try to merge them?”
This process can take anywhere from two days to a week, depending on how long I need to stare at them and how many changes are being made.
Following that, Meril moves onto the final sketch with a bit more detail. Once we’re certain we’re on the same page with the final direction she starts rendering. As an author this stage of the process is basically magic to me. Because she transforms (granted, an already amazing rough) into an even more amazing final illustration.
When she’s close to the final she sends it to me (by this point I’ve already poked her for updates because I’m way too excited not to) and we do any last-minute editing like color changes, softening lines, or adding small details.
Once all that is done she sends me the final illustration and I do the text layout on it. And, that’s how the Air Awakens covers come to life!
What’s your favorite cover so far?
I like them all… They each have something that I think is perfect for the book they’re representing about them… I suppose, it’s a toss-up between Earth’s End and Fire Falling. Earth’s End just wows me with the background Meril created, it’s going to be a gorgeous hardcover book. There’s also a lot of teasers in there. But, Fire Falling has Aldrik on the cover, and that’s never a bad thing!

Hello reader! Welcome to my first blog post.
On today’s topic, I’ll be showing you my journey on how I made the illustration for Elise Kova’s 3rdinstallment of the Air Awakens series; Earth’s End.
I’ll be covering the initial stages in depth, from thumbnails, artistic insights to design problems and finally to the finished painting.
Are you excited? Me too! Let’s get to it!
Idea Generation The one thing we all dread at times is how to come up with ideas. Where do we even begin? I suppose to most artists this part is usually not a problem since creativity tends to just start flowing once we start and get really into it. With Elise’s series it was much easier because the story was already laid out in the open for me to interpret (Elise sends initial manuscript and excerpts for me to read and interpret as I go). But for the most part, sometimes we just get stuck and don’t know what direction to go for. With that said, the initial problem I encountered with this project was proper visualization and relevance.
There are questions that roam my mind during idea generation stage. How do I make sure the cover stays relevant to the story without giving away too much content, along with random ones and others like; what easter eggs should I put in that the readers could go back to notice and enjoy in the cover? What is the mood I’m going to portray? Do I pick out specific scenes or do I go with the abstract route? Etc.  These type of questions usually guide me into conceptual thinking.
Click here to continue Reading
Merilliza Chan (Deviant Art: zwxArt, Twitter: @zwxArt)
Lastly

Elise will be raffling off an Air Awakens Swag Bag! This will include: