Giveaway: This is where it ends copeies, chalk, and chalkboard

Marieke Nijkamp is a storyteller, dreamer, globe-trotter, geek. She holds degrees in philosophy, history, and medieval studies, and is an executive member of We Need Diverse Books, the founder of DiversifYA, and a founding contributor to YA Misfits. 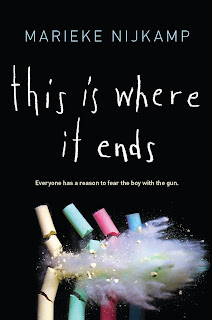 10:00 a.m.
The principal of Opportunity, Alabama's high school finishes her speech, welcoming the entire student body to a new semester and encouraging them to excel and achieve.10:02 a.m.The students get up to leave the auditorium for their next class.10:03The auditorium doors won't open.10:05Someone starts shooting.Told over the span of 54 harrowing minutes from four different perspectives, terror reigns as one student's calculated revenge turns into the ultimate game of survivalSourcebooks Fire is giving away advance copies of This Is Where It Ends along with chalk boards & chalk.
Here: http://thisiswhereitendsbook.tumblr.com/extras

You don't want to miss this, This is where it ends was AMAZING!
Labels: asjdjfkjfjfkjgkgg Giveaways net-galley requested promotions